I took a sabbatical from exercise. And then I ate chocolate like there was a prohibition on chocolate. I ate, drank, and oh I was merry…for a little while anyway. I not only fell off the wagon, but I hacked it up into kindling, started a bonfire and made smores by it.

Why?  I really don’t know but…

Here’s what I do know, my body was pissed right off that I took a break. And I explained to it that “we were on a break”, but it didn’t seem to matter because it fought back like a cat stuffed in a boot (weird reference, but sadly I’ve actually saw my Dad stuff a cat into a boot. Don’t judge, it bounced out and lived for another 20 years).

My joints seized up; if I sat too long I had to shuffle for a bit after standing just to get going. My skin broke out…it’s not fun having the skin of a 13-year-old boy let me tell you.  I was sad for no clear reason and I wanted to punch things. Often. I was hungry more often even though I was eating foods that were richer in fat content and calories. For the first time in years, I wanted to binge on potato chips. The kind of binge where you suddenly awake as if in a trance-like-state surrounded by potato-chip crumbs. I was sick more often within two months than I had been in years. Doesn’t that sound fun?!

So the other day I decided I was going to go back to eating healthy foods and get off my ever-expanding tush and go for a run. I loaded up my iPod with a Power playlist that makes it impossible to sit still while listening (or at least will have you shoulder dancing). The 5K that I could once run in 30 minutes, took me 41 minutes. It was like starting from scratch. My legs felt like I had small children attached to each one and I drug them the entire way.

As I was running, I thought about ways to trick my mind into thinking this run was enjoyable and hopefully I would feel motivated to press on for the full 5K. Here’s what I came up with… 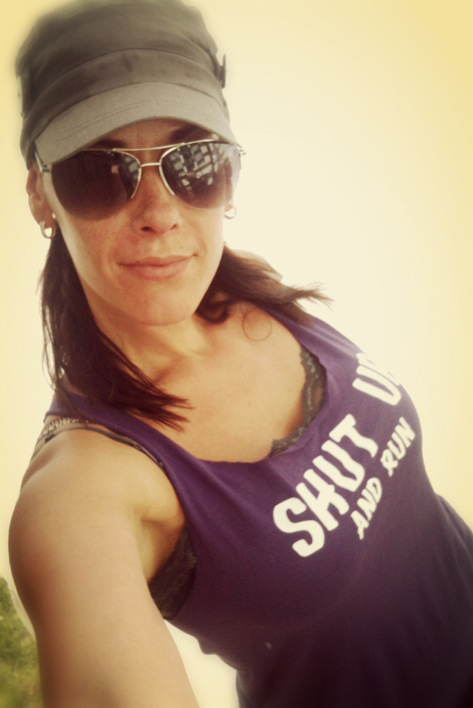 I’m pleased to report that I did finish my 5K and I’m back on my healthy eating/exercise program. Remind me to never check out again, that wasn’t fun in the long run.

Here’s some power list songs that keep me running when I want to stop:

“Rusted From the Rain” by Billy Talent

“Hitchin’ a Ride” by Green Day

“Lonely Boy” by The Black Keys

“Some Nights” by Fun

“A Warrior’s Call” by Volbeat

“Let it Roll” by Flo Rida

“Tonight is the Night” by Outasight

“All of the Lights” by Kanye West

“Where Them Girls At” by David Guetta, Flo Rida, Nicki Minaj

If anything you’ve read here makes you want to Shut up and Run, then my work here is done.  😉

From my heart to yours,

P.S. I have yet to weigh myself, but the muffin top that spills over my jeans tells me I have some work to do. Ok body, we are no longer “on a break”.